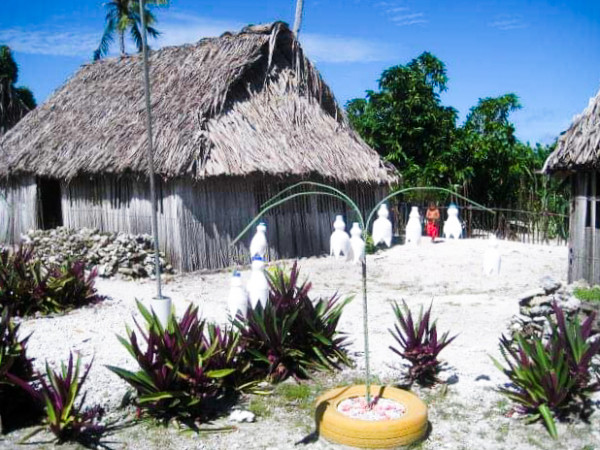 Martin McMorrow is one of the VSA volunteers who has been able to continue his assignment, as an English language adviser, by e-volunteering.

“I was actually on leave overseas when the recall came,” Martin says. “VSA brought me back to New Zealand. It was nice for me to be able to do three months of e-volunteering on top of my 15 months in Kiribati. I wanted to continue being involved after returning.”

Martin’s time in Kiribati meant that he had a good idea of how things worked at the state senior secondary school on Tarawa, the islands’ main population centre. Without that first-hand experience, he says, e-volunteering would have been much more of a challenge.

“I know the rhythm of the school year at King George V & Elaine Bernacchi School (KGV-EBS),” he says. “And I know the people who will be using the resources I developed, like the stories I’ve recorded using the prescribed texts students need to study for national examinations.  E-volunteering became a form of blended learning bringing together the face-to-face contact and digital learning.”

Martin’s assignment in Kiribati revolved around helping the teachers at KGV-EBS to develop the students’ English language ability, seen as the key to further educational opportunities and ultimately finding a good job either in Kiribati or overseas. “All the teachers spoke English well enough to teach,” Martin says. “My focus was on giving them ideas and resources to get the students using English communicatively in the classroom.

“I realised that getting into that school was quite an achievement for students and it was an even bigger achievement to graduate. There were 220 students in Year 10, but fewer than 100 by Year 13.”

Martin ran professional development workshops for teachers and produced various teaching resources, moving on to co-teaching and mentoring in the latter part of his assignment. “I feel now I would like to have done more,” he says. “But I need to look at the positive side. I had good attendance at the workshops and I provided new graded readers and resources for teachers for practical, ongoing training. It’s a question of incremental rather than transformational improvement.”

The school did not have its own website, so Martin set up a Facebook page which later became a useful tool once he was back in New Zealand.  The page was centred around Martin’s idea for a twice-weekly “Global Club” workshop to provide students with opportunities to practise their English by interacting with invited guests from Kiribati’s international community.

“It struck me that there were a lot of interesting people on the island, and the students were thirsty for knowledge about the outside world,” he says. “So we invited people onto the campus to talk about themselves and their work. Many of them were very well travelled.”

Students who had never had to wear a jumper, or seen land higher than three metres above sea level, listened to VSA programme manager Trevor Johnston describe how he took part in an expedition to Mt Everest. A Spanish guest had worked in Somalia developing fisheries as an alternative to piracy. A Cameroonian nutritionist – the wife of the local UNICEF representative – gave a presentation about her work and a female engineer from Christchurch described her time in Rwanda with Engineers Without Borders, building a bridge with the help of other female engineers and community involvement.

“These were great examples to young female students,” Martin says.

The Facebook page contained photos and descriptions of the visits plus links to various resources for teachers and students. It continues to be active, with 1208 followers at the last count. Most recently Martin was delighted to receive an email from former British volunteer Peter Vine who as a 17 year old had spent his gap year at KGV-EBS nearly 60 years ago.

“He tracked me down through the Facebook page,” Martin says. “He did some remarkable things at the school, including staging a play and publishing magazines. He’s just published his memoirs, so I ‘ve recorded a Zoom interview with him which I’ll post to the Facebook page.”

Martin’s assignment has now ended, but he says he would be happy to volunteer again. “It’s a privilege,” he says. “You’re working there and trying to make a difference, but you’re also aware of how privileged you are to be there. And when you return, the option of continuing to be in contact through e-volunteering is good, as long as it is set up carefully and has commitment from the other side.”