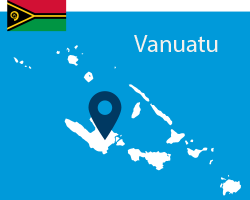 VSA has been working in Vanuatu since 1965. Our volunteers help to strengthen economic development within tourism and agriculture, develop rural vocational education, support health initiatives, empower youth and improve waste management and water infrastructure. VSA has a field office in Luganville.

The Vanuatu programme strategy is guided by Vanuatu 2030 The People’s
Plan which prioritises social and economic development, as well as economic
growth, with a vision of a stable, sustainable and prosperous Vanuatu. The
Plan focuses on improving the wellbeing of the people (society); protecting
and enhancing the environment, and maximising opportunities for shared
prosperity.

VSA currently works with multiple partners in Vanuatu on a range of assignments, including: