21.09.2020 - In the late 1960s, while he was teaching at Queen Victoria School in Fiji, Gavin Kerr helped VSA with a young volunteer who was having some problems.

This was the beginning of more than fifty-year association, including being Council Chair and then President.

After five years in Fiji, Gavin, his wife Elizabeth and three children returned to live in Nelson in 1970.

“I saw an ad in the newspaper about forming a VSA committee in the Nelson area,” says Gavin. “I was interested in finding out more about VSA, but also was finding it a bit difficult adjusting to life back in New Zealand and was looking for something meaningful to become involved with.”

Gavin turned up to the meeting and there were only eight people there along with Peter Cape, VSA’s Publicity and Recruitment Officer.

“Everyone who attended became part of the committee,” Gavin laughs. “And I was the Chair – largely by default!”

A year later Gavin was invited to join the VSA Council.

“It was quite a small group. There were around eight people and each had particular area of expertise. For example there was Maurice O’Brien who was a QC and Jim Rowe who was a Professor of Economics at Massey, while I had experience in a developing country, Fiji.”

Gavin’s tenure in the Council included being Chair from 1978 to 1981, being on the Selection Committee (which recruited all volunteers and staff) and being on the Personnel Committee.

“The Personnel Committee produced the first salary scale for VSA staff,” says Gavin. “We worked very closely with MFAT staff on this and they were very helpful.”

Some of the many highlights for Gavin included meeting “so many interesting people doing such valuable work, particularly the volunteers of course” and working on VSA’s special anniversaries.

There were also challenges. “The Muldoon era (seventies and early eighties) was very difficult for VSA financially as with high interest rates and soaring inflation we were struggling financially. But we came through.”

Another challenge was when the African and Asian programmes stopped. “The NZ High Commissioner to South Africa said at the time that VSA had been the “face of New Zealand” in Africa, which was heartening to hear.”

Gavin left the VSA Council in 1988 when the “Tomorrow’s Schools” initiative began in the New Zealand education system. Gavin was then Principal of Horowhenua College and his workload increased dramatically.

Although Gavin left the Council, he remained actively involved with the Manawatu branch. In 1999 he became VSA’s President, a role he was in for more than 15 years until 2014. He has also been a VSA Life Member since 2012.

Gavin’s life outside of VSA has also been busy. He started teaching (English and History) in 1959 and has had a variety of roles including Head of History at Waimea College, and Deputy Principal and later Principal of Horowhenua College. When he “retired” in 1994 he went with Elizabeth to Pakistan where he worked at English Medium Schools for four years.

“I had thought of doing a VSA assignment, but wanted to live on the Asian sub-continent and live in a Muslim society to immerse ourselves in the local community and culture.”

While teaching in Fiji, Gavin realised that there were no text books on Fijian history or geography.  All the texts were about Britain. So Gavin and fellow New Zealander Terry Donnelly wrote the very first school text book about Fiji’s history and geography. The book was published in 1969 and was still in print (although updated) until last year.

His latest project is a book of poetry, Under Lockdown, written in March to May this year.

“I decided that one way to mark the time spent under such restriction would be to write a poem a day, reflecting both on life under lockdown and whatever took my mind at the time.”

Sadly, on the eve of the lockdown Elizabeth, Gavin’s wife of 61 years, passed away and some of the poems reflect this. Elizabeth was a French teacher who had a huge interest in VSA and was exceptionally supportive of Gavin’s involvement.

Gavin has now sold over 200 copies of the book and has raised $1000 for Alzheimers New Zealand. 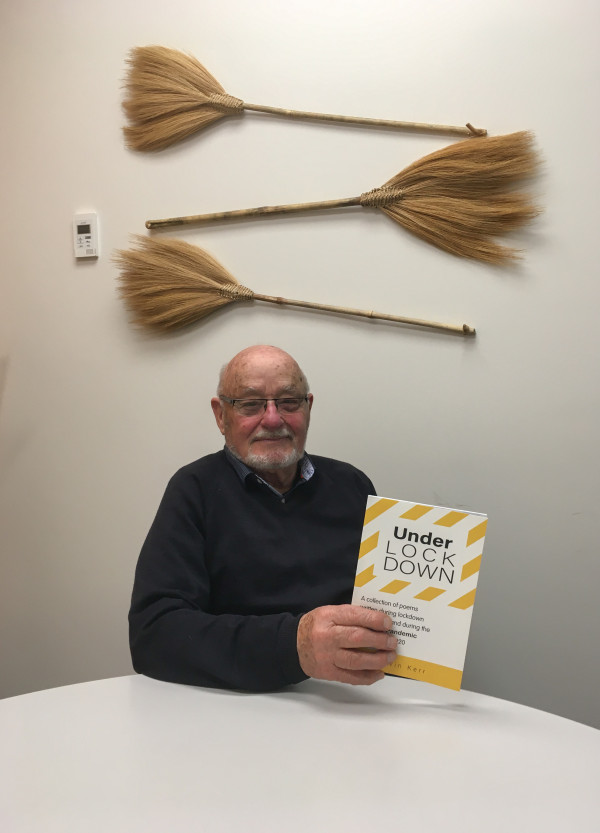 Gavin is still actively involved with VSA (and according to Kelly Nelson, VSA’s Executive Coordinator, he is the “font of all knowledge” about VSA and its history). However, his involvement is now mostly “from the sidelines” particularly when there is something important that he would like to contribute to by either helping to plan or by making suggestions.

Gavin has some thoughts about how to celebrate VSA’s sixtieth anniversary. “I think it is an opportunity to recognise the founders of VSA such as Colin Aikman, Maurice O’Brien and Jim Rowe. These were the people who were responsible for establishing VSA, developing our relationship with the government (including $20k funding from the Prime Minister of the time, Keith Holyoake) and setting the foundations of the VSA Constitution.”

Gavin is upbeat about VSA’s future. “While travel may be a problem for some time, we may be lucky as parts of the Pacific region are relatively COVID free at the moment. So there may be opportunities soon.

“VSA has become a key part of New Zealand’s face to the outside world and we are one of the leading organisations in our field. We are recognised as a high value organisation by overseas volunteer agencies.

“Our longevity demonstrates and emphasises the flexibility and stability of VSA, so we need to continue to be proactive and explore all possibilities so we can be ready to jump into things again as soon as we can.”