21.02.2020 - A severe lack of rainfall on Aniwa Island last year led to Aniwa community leaders seeking support for drinking water and food from the Vanuatu Government. In response to the community request, the Council of Ministers activated the National Disaster Management Office (NDMO) in December 2019 to respond and in January 2020 the Department of Water Resources (DoWR) put together a team to address the crisis.

Over 500 people live in three rural communities on Aniwa and they depend heavily on rain water harvesting for drinking and cooking water. There are limited alternative water sources available for drinking as boreholes and hand dug wells are brackish. Most people on Aniwa depend on sea water for swimming and face difficulties with limited water for cooking and drinking.

While there is a desalination unit on Aniwa, this was not working. It needed a new battery for the generator and there was no clear structure for its operation and maintenance.

VSA volunteer Michelle Knappstein was part of the DoWR’s WASH Emergency Response Team (ERT) sent to address the water issues in Aniwa. The team’s initial work was to assess the situation and plan a rapid response.

“We had to move quickly and work closely with the community,” says Michelle. “The people needed urgent short-term relief as well as more long-term solutions.”

Over the first few weeks the team distributed more than 24,000 bottles of water and 1,000 litres of water from the desalination unit to the affected communities.

“We also made 6,000 litres of water available for distribution at the desalination unit and discussed the operation and maintenance of the unit with the relevant water committees.” 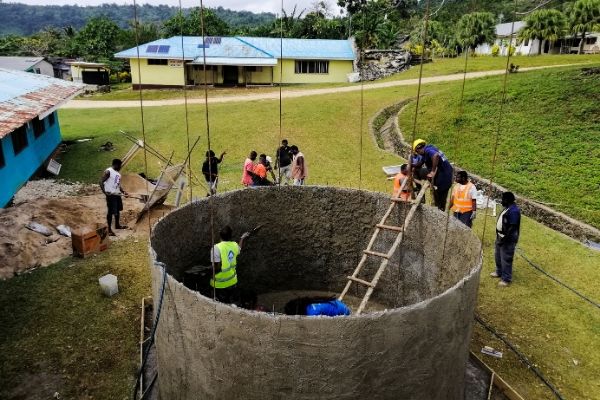 Building a ferrous cement tank and connecting it with guttering to an existing community hall in Hog Harbour, Vanuatu as part of the Department of Water Resources Plumbers Training

With the immediate crisis averted the team came up with longer-term recommendations including training and workshops for community members, reviewing the desalination unit maintenance contract and constructing a new water system that would deliver water from the desalination unit to the communities.

This essential project is just part of the wide range of work Michelle is involved with in an assignment developed in partnership with Engineers Without Borders (EWB). “I help my Ni-Vanuatu counterparts collect information from the field to use in design, prepare designs for rural water supply systems, prepare documents to procure materials and construct and monitor projects,” Michelle explains.

Michelle works closely with her partner organisation counterparts and with communities in the Southern Provinces of Vanuatu (Tafea, Shefa and Malampa). She is helping to build capacity within the Department of Water Resources to complete surveys, designs and procurement without assistance.

"We generally go to a community to monitor a Drinking Water Safety and Security Plan (DWSSP) workshop occurring in one of the communities or to collect information following a DWSSP to help the community with the water supply improvements in their improvement plan that was prepared during the DWSSP. It’s all about improving accessibility and safety of rural water supply to communities.”

One example of building capacity has been Michelle’s involvement in the Department of Water Resources Plumbers’ Training. “One of the older DoWR staff was retiring and the training was run to pass on as much of his knowledge as possible to other staff members. I helped with some of the theory sessions on engineering design and surveying systems and also participated and helped out in the practical sessions. We built a ferrous cement tank and connected it with guttering to an existing community hall in one community (Hog Harbour), we built one new Rainwater Harvesting Structure in Sara and also connected some tanks and guttering to existing buildings in Sara and Kohle.

“Working closely with communities can be challenging for a variety of reasons. Some of the most rewarding experiences have been watching how my counterparts deal with these difficult situations and make the most of them. I also love watching some of the graduates in the team grow and take responsibility for their work and making decisions.”

While volunteering has its challenges, it also has some fantastic highlights. “Some of the many highlights so far have been calling a banana boat on Epi with a fire, walking back from a long work day along a black sand beach under moonlight with my counterparts – and of course learning about the culture and becoming connected to the place and people.” 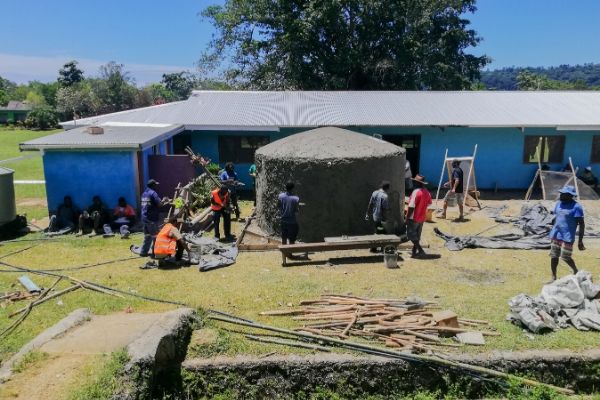 Building a ferrous cement tank and connecting it with guttering to an existing community hall in Hog Harbour, Vanuatu as part of the Department of Water Resources Plumbers Training