“They have assimilated into our culture here in Rabaul,” he says. “I believe that when you go to another country you have to walk with humility. You are a guest and that requires a sense of respect for your hosts.

“Some people have come to Rabaul and acted as hosts. The New Zealand volunteers have always come as guests.”

The first VSA volunteers came to St Peter Chanel Catholic College in 2016, two years after it was set up by the Catholic Church. The Church saw an urgent need to train secondary school teachers in religious education, mathematics, and science teaching -- subject areas which Alfred says were, and are still, lacking in Papua New Guinea.

“The idea was to complement what the country already had and provide for what was lacking,” he says. “Students performed very poorly in science subjects in our schools and the intake for science subjects in colleges and universities was, and still is, low compared to the humanities.”

The College opened with a teaching staff of nine and an intake of 75 students from around the New Guinea Islands Provinces. The students were non-school leavers who had missed out in the selection processes for continued education after completing their Year 12 schooling.

Of the first 75, 36 graduated in 2017 with a Bachelor of Secondary Teaching degree focusing on mathematics, physics, chemistry and biology as well as religious education. Today there are 125 Year One students enrolled at the school out of a total enrolment of over 400, with a staff of 26.

For many of the students and staff, English is their third or fourth language, which is where the VSA volunteers have come in.

“We need a certain level of English language proficiency because we teach scientific subjects in English, so it’s quite a challenge,” Alfred says.” If you have someone teaching whose first language is English it’s so much better, because they understand all the nuances of the language.”

Thanks to VSA, a literacy programme initiated by volunteer Ruth Crooks has been set up for students really struggling in speaking and writing in English. “Since that began we’ve observed a real difference in the way students have been able to absorb other subject areas,” Alfred notes. “The programme has really lifted their ability.”

“It’s our aspiration to expose our staff and students to other ways of thinking by engaging with overseas academics in mediums like real-time lectures using Zoom technology. That needs fast Internet speed,” he says.

“We’ve now bought 39 Microsoft Office-365 licences for our staff and free licences for students, so both students and staff are now using internet technology more for communication and curriculum work.”

Another major challenge for the College is that while every student that graduates gets a job as a science or mathematics teacher, the schools they go to lack the funding to provide laboratory facilities. “They end up teaching the concepts and asking pupils to use their imagination,” Alfred says regretfully.

But despite the limitations he faces, Alfred is determined to see his vision of a science-savvy school system in Rabaul come to fruition.

“My vision is that the teachers we train will teach a new generation of young scientists for Papua New Guinea,” he says. “I want to see young inventors coming out of our schools. People who can create greener forms of energy for our country.”

Alfred sees VSA as an important partner is achieving that vision. He hopes post-Covid to host VSA volunteers who can assist with e-teaching and learning platforms and who have a significant amount of teaching experience in the sciences and mathematics.

“We really appreciate the VSA volunteers," Alfred says. “The fact that they come alleviates a lot of funding pressures for us.” 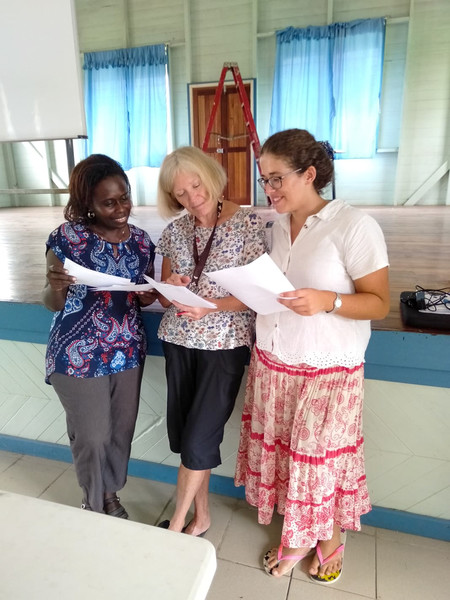 Picking up the phone in PNG