This year Volunteer Service Abroad (VSA) celebrates its 60th birthday. My focus in this brief article is on the last two decades, when VSA last recorded our story (through publications like The VSA Way and New Zealand Abroad: the story of VSA’s work in Africa, Asia and the Pacific). 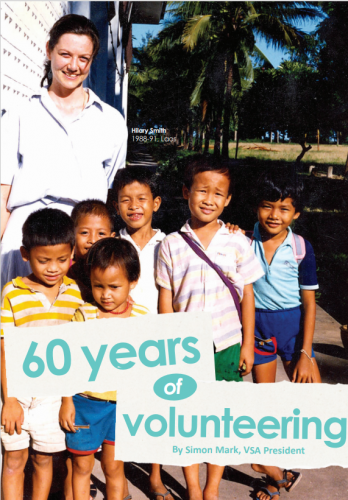 Since 2002, 1,123 VSA volunteers have worked with partners overseas. That’s a lot of great mahi. Our partners here and in the Pacific continue to acknowledge the impact of our volunteers, and seek VSA’s support. Our reputation remains strong and we receive bipartisan political support. Our funders and supporters still have faith in our vision, and we have received several very generous bequests. The commitment of staff and volunteers in Aotearoa New Zealand continues to be extraordinary, and we remain relevant, sought after, supported, and viable.

Despite this rosy picture, the last two decades have been challenging. In 2012, VSA’s field of operation reduced from Africa, Asia and the Pacific, to the Pacific alone (in which we include Timor-Leste) because of changing foreign policy priorities of the government. It was a shock. We had a long track record in Africa and Asia. In some parts of Africa, we were to all intents and purposes the sole face of Aotearoa New Zealand, and its only ‘official’ representation. This aspect of our work, our on-the-ground public diplomacy, is now acknowledged much more overtly by government and MFAT.

In March 2020, in response to COVID-19, we repatriated all our volunteers to Aotearoa New Zealand. This resulted in a 30% reduction in core MFAT funding, and unfortunately six staff were either made redundant or did not have their contracts renewed. Then VSA was hit by a cyber-attack. The commitment and professionalism of staff dealing with these crises was outstanding.  Volunteers are now heading back into the field.

Volunteer assignments have shortened, from the standard length of two years. There are now many more short-term assignments, reflecting a change in the demography of would-be volunteers. We now have over 60 e-volunteers carrying out assignments from Aotearoa. Over 100 university students have served overseas as part of the UniVols initiative, launched in 2007. We are filling assignments with local volunteers;  the COVID-19 call centre in the Solomon Islands, paid for by VSA and the NZHC in Honiara, is staffed by Solomon Islanders, and in Timor-Leste we have placed into assignments eight Timor-Leste students who have returned to their country having undertaken a New Zealand scholarship.

Programme managers, including several local nationals, are now located in eight countries, and in 2018 three new programme managers commenced work, in Samoa, Tonga and Kiribati. We have developed a wide range of partnerships in Aotearoa New Zealand and the Pacific; with UN agencies and NGOs based in the Pacific, private sector firms such as Downer, and with organisations such as Taituarā (Local Government Professionals Aotearoa). We remain a volunteer organisation: the work of volunteers abroad has been made possible not only by VSA's staff and funders, but by volunteers, on the Council, Foundation and through branches (now called interest groups), who provide support to volunteers, before, during and following their assignments. Manawatu, Top of the South and Canterbury remain active and host events throughout the year.

A new recent focus broadly concerns our commitment to Te Tiriti o Waitangi — in practice, our diversity and our connections to the Pacific. VSA must reflect the country in which we live and the region in which we work. We are lucky to have as chair Hone McGregor (Te Ātiawa, Ngāti Rārua) and as deputy chair and kaitakawaenga Kirikaiahi Mahutariki (Te Arawa, Mataatua, Cook Islands (Tongareva), Tahiti). We are enhancing our partnerships and connections with Pacific peoples in Aotearoa New Zealand. As part of this mahi, we recently appointed a Partnerships Liaison - Pacific Peoples and opened an office alongside the Pacific Cooperation Foundation in Tamaki Makaurau, and we are working with Pacific leaders to strengthen our relationships with communities in the region.

The world in which we operate reflects the ever changing geographical, political and cultural landscape of the Pacific. Progress measured against the Sustainable Development Goals (adopted by the UN in 2016) is mixed, and massive challenges such as natural disasters, climate change and COVID-19, mean that there is likely to be a role for VSA in the decades ahead. I think we are well placed to undertake this role, in the spirit of friendship, fairness, social justice and self-determination.