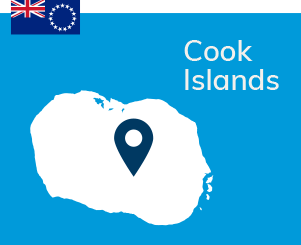 Volunteer Service Abroad (VSA) worked in the Cook Islands from 1977-2000. Thirty-six volunteers worked there, all but two of whom were teachers. VSA’s decision to leave the Cook Islands was largely due to a shift away from a model of placing volunteers as teachers in schools. VSA has now returned to the Cook Islands to work on a wider range of assignments, at the invitation of the Government, initially to build the capacity of the public sector.

The economy is mainly based on tourism and marine resources. Agricultural products include copra, fruit and vegetables, coffee, pigs and poultry. Economic development is vulnerable to environmental factors and global economic trends, with economic growth limited by environment, infrastructure constraints and a labour shortage. The Islands have a trade deficit (importing, mainly from New Zealand, far more than they export).

What we’re doing in the Cook Islands

VSA’s assignments in the Cook Islands are currently focused on the public sector, particularly in tertiary education. The Cook Islands Government wishes to lift the skill level of the population by expanding post-school training options, increasing the range of qualifications on offer, and connecting training more directly to the needs of local industry. There is also a focus on the training needs of young people and the Pa Enua (outer islands).