Tiana Epati points to the influence of a VSA volunteer on her father in Samoa over 50 years ago as a factor in her recent appointment as president of the New Zealand Law Society. 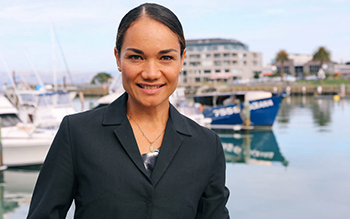 Tiana Epati says former volunteer Bruce Roberston had a big influence on her father's decision to become a lawyer.

Ms Epati, 43, takes up the role in April 2019, the fourth woman and first Polynesian in 120 years to hold the position. She has followed her father, Semi Epati, into law. In an interview with online Sunday magazine e-tangata, she explained how he took his first steps into the profession.

“As a boy, he went to Samoa College where he met a young New Zealander, Bruce Robertson, who was there on VSA. He helped teach Dad English. And he spoke to Dad about his plans to head back to New Zealand and go to law school. So Dad’s interest first came from this VSA volunteer English teacher.”

Bruce also became a lawyer after teaching in Samoa in 1965. Now a retired Court of Appeal judge living in Wellington, he not only remembers his former student well but he’s also kept in contact over the years. “Semi was only in the fourth or fifth form but he stood out. He was an enthusiastic, larger than life character.”

Bruce was meant to teach on Savai’i but because of a cyclone he couldn’t reach the island, so he taught initially at Samoa College on Upolu where Semi was a student. Later, while tutoring part-time at the Otago University law school, Bruce caught up with Semi who had won a scholarship to study there.

He continued to have dealings with Semi over the years, such as when Bruce sat on the Court of Appeal in Samoa and when Semi became a district court judge in New Zealand.

Bruce describes Tiana’s appointment as “an extraordinary achievement”. For her part, Tiana says her father went in to law because “he was very much someone who wanted to help his own people and others”. Bruce may well have had a similar motivation when volunteering, one that has borne fruit over 50 years later.