A trip to Sarawak in 1962 by school-leaver volunteers Doug Johnston and John Baird featured in local newspapers and caught the eye of then Prime Minister Keith Holyoake. 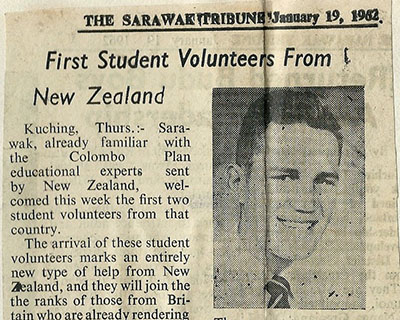 Local papers, as well as this Sarawak paper, reported on the young Kiwis' trip.

Doug was fresh out of Christchurch Boys High School and John had just left Christ’s College. Mr Holyoake asked to meet the pair, commended them on giving up a year of their lives to volunteer, and gave them a letter of introduction.

Their adventure was to have a huge impact, Doug says. “There was no doubt as to the long term benefits for me of our experiences in Sarawak. For me personally South East Asia has been my life.”

He gained a PhD after field research in Malaysia, became a lecturer on Southeast Asian geography at the University of Canterbury and spent two years on the staff of the UN. In this piece, illustrated by his old newspaper clippings, Doug writes about his volunteering and where it took him. His recollections were prompted by an appeal from UK researcher, David Phillips, who is writing a history of overseas volunteering in East Malaysia.

A former volunteer for the UK-based Voluntary Service Overseas (VSO), David is keen to acknowledge the contribution of organisations such as VSA, as well as VSO and the Peace Corps. Any former VSAers from Sarawak, Sabah or Brunei are invited to contact David at sarawak.contact@yahoo.com.