Former VSA volunteer Robin Stewart spent a week at a school reunion in Vancouver, Canada, last year, thanks to a group of students he had taught in Brunei nearly 50 years ago.

Robin (rear, at right) at dinner with the former school principal and others from St Margaret's School in Seria, Brunei.

Robin, today International Director at William Colenso College in Napier, says an email invitation arrived “out of the blue” from former students of St Margaret’s School in Seria, Brunei, where he volunteered from 1969 to 1970. “I said I couldn’t afford to go but they said they would pay for me and my wife Kathleen. They also invited another volunteer, David Mitchell, who had taught there just before me.”

The students, who had migrated to Vancouver in the 1980s and done well in various businesses, had fond memories of their former Kiwi teachers. When Robin arrived in Brunei, Europeans there were mainly oil company executives or army officers who had little regard for the locals. 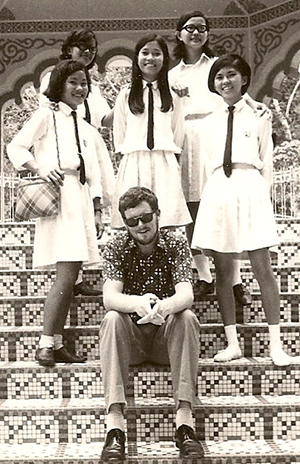 On a field trip to Brunei town.

At the Vancouver reunion, Robin confided to his former school principal’s wife that he couldn’t quite believe the students had paid for two volunteers to attend. “I was told that we were the first Europeans they had met who had treated them like people.”

The executives and officers also looked down on the volunteers, Robin says. “Coming from Central Otago, I had never come across those attitudes before, and I found it a bit hard to take.”

The Kiwi Connection give a fine rendition of Po Ata Rau.

He laughs when recalling his VSA induction, at Wellington Teachers’ College with 60 or 70 mainly school leavers just before Christmas 1968. “I was meant to be going to Samoa but I was taken aside and told I was going to Brunei. I had no idea where it was and in our lunch break I went to the library and looked it up.”

His mother, when told of the change of plans, was horrified. “She had images of head hunters and the wild men of Borneo.” She needn’t have worried. At St Margaret’s, a mission school, Robin met and married Kathleen, who is of Bidayuh, Chinese and Dutch descent and he later returned to teach in Brunei, Sabah and Singapore, eventually spending 10 years in the region.