Former volunteer Del Bovill spent a 20-hour day in tropical heat as an observer in Timor-Leste’s recent presidential elections, an experience she would not have missed.

A festive atmosphere prevailed at a huge rally for favoured candidate Lu’Olo in Dili the day before the election. “It was quicker to jump out of the taxi and walk to the rally,” Del says.

Del was in a 26-strong Australian mission that spent four days observing the elections held on 20 March. It was the first election run entirely by the Timor-Leste Electoral Commission without outside support and it went extremely well, she says.

An experienced observer, Edward Bagnall, and Del were at the polling booths at 6am. They visited eight booths in Baucau and Viqueque districts until voting closed at 3pm. Counting was scrutinised until 11pm then they travelled with boxes of votes to the tally centre in Baucau town, her day finally ending around 2am.

“It was all very exciting with the results being flashed up on big screens, just like back home,” she says. 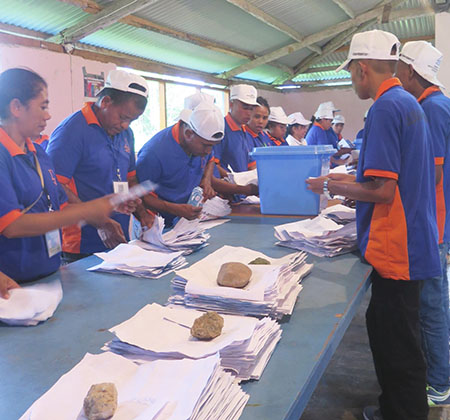 Counting gets underway at Gariaul, a small suco (village) in Baucau district.

The runaway winner was Francisco Guterres, or Lu’Olo as he’s known from his days as a resistance fighter. He had been endorsed by both major parties. The process across the country was peaceful, in contrast to the violence that plagued earlier elections after Indonesian forces withdrew in 1999.

Del had spent 3½ years as a volunteer in the Xanana Gusmao Reading Room in Dili, finishing in November last year. She had always planned to return and a chance suggestion from a Reading Room contact about being an election observer provided the opportunity.

“Going back felt great,” she says. “I had lots of offers to be picked up from the airport but I wanted to jump in a yellow Dili taxi, just like when we first arrived.”
Del self-funded her two-week trip, staying with VSA volunteers and VSA programme manager Victoria Gregory while in Dili, and in cheap guest houses out in the districts.

Del, who is originally from Opotoki, is now back home in Wangi, north of Sydney, with her husband Tony. But she remains in touch with Reading Room staff and is an adviser to the Board than runs it. “I’ll definitely be going back to Timor-Leste again,” she says.