Back in 1972, VSA published a cyclostyled A4 monthly newsletter, The Mosquito, which was posted to volunteers from South Africa to Samoa.

Many contributed stories about their assignments. These snippets give insights into their volunteering lives nearly 50 years ago. 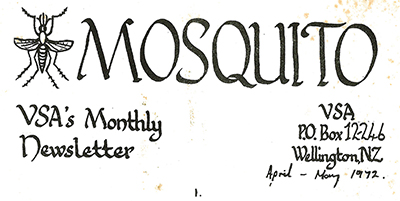 The language seems to be improving steadily. Well, I’m understood. One day though my kids were left wondering. I’d lost my keys, and without knowing it I was asking them if they’d seen my marijuana. They kind of gave me funny looks.
- Tom Moore, Pakred, Thailand.

The rain is raining all around
But mainly here in Tonga.
And if it’s going to keep it up
We won’t be here much longer.
- Ken Bogue, Ha’apai, Tonga.

The class is sitting down – I’ve rearranged the seating. I was tired of seeing boys on one side and girls on the other, so now have boy-girl-boy (or vice versa) in every row. It’s less formal and far better for control.

I’ve also moved the seats so there is a large square in the middle of the front of the room, which is very useful for Tate work, drama, maths activities. The roll stands at 35.
- Fiona Robertson, Sasamunga, BSIP (British Solomon Islands Protectorate).

I’ve done such things as eat horse, which I didn’t know I’d eaten till I got home. Atiola, the guy whose family I live with, just told me it was ‘Tongan beef’. Even so, it tasted very nice.
- Bill van Peer, Vava’u, Tonga.

How about this (New Zealand couldn’t provide it)? My carefully planned maths test interrupted, gleefully I suspect, by the boys to kill a snake which appeared over the edge of the roof!
- Janet Thomson, Goldie College, Solomons.