Every volunteer grapples with the language issue: speak English or learn a local tongue? Language expert Hilary Smith looks at local languages, English and mother tongue education, and the research of several former volunteers who also work in this field.

I have been reading an account by Hugh Wilson, one of VSA’s first volunteers, about his year as a school leaver in Borneo. Now well-known for his work on the Hinewai Reserve in Banks Peninsula, in 1963 he was a science teacher at a secondary school in the Malaysian state of Sarawak. The Year of the Hornbill* is a lively account of his assignment, and I have been particularly struck by how similar the language issues he discusses are to those I faced in my VSA assignments in the 1980s, and to those reported by today’s volunteers.

Sarawak has around half a dozen language groups, with many sub-groups and dialects. It is an ethnically and geographically diverse country, and people in isolated regions have less access to the languages used in the urban areas. Wilson reflected on the language policies in his school, and country as a whole:

"I wondered at first why English was the medium of instruction, and not the native tongue. But what native tongue to choose? It is true that Malay is the interlingua of the whole area, but few people indeed speak the official Malay which alone could cope with modern education, and that only with a great number of borrowed words."

In his holidays, Wilson visited the remote area of Borneo and stayed in a traditional longhouse:

“We wish you could speak Kayan, and we could speak English,” said a motherly-looking woman with two little children clambering on to her crossed knees.
“You must try and learn,” said a young-looking man standing near the door. 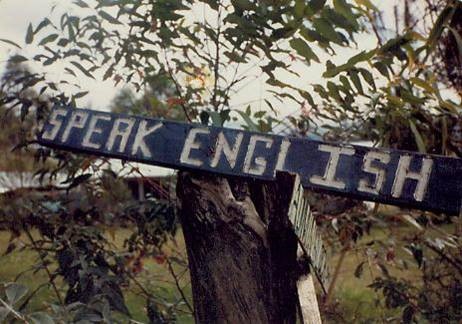 Sign at the entrance to Lalibu High School, Southern Highlands, PNG, 1984. The students rarely spoke in English but used one or two local languages as well as Tok Pisin to communicate. (Photo: Hilary Smith)

There is no mention of Wilson’s response to this suggestion, which would have been difficult without seeming to reject the people and their hospitality. It’s near impossible to learn all the languages of Sarawak, and even one is hard enough for a volunteer busy in their day-to-day job. Wilson did his best to learn Malay, but encountered difficulties familiar to many people learning a new language:

I would go down to the market expecting to get some really good practice in colloquial Malay, and this would happen:
“Selamat pagi, tuan. Apa khabar?” I’d say.
“Fine thank you. What would you like to have today?”
“Mahu buah pomelo ini, buah pising lagi. Berapa?” I’d persist.
“These ones here. Very cheap, but not very good, sir. These here, 20 cents one bunch.”
“Oh, I’ll have the cheap ones I think. Thanks,” at this stage giving up the unequal struggle and breaking into English – I guess to his secret relief.

Perhaps the stallholder wanted to practise his English, or felt that Wilson did not appreciate his good grasp of an important international language? It seems less likely that Wilson’s level of Malay was felt to be disrespectful, which is a response I have encountered in some situations.

The ‘language ecologies’ in our part of the world are some of the most complex on the globe, and it can be problematic for an outsider who is entering a new system to know what is the best approach to take in their language learning and use.

In many ways there are no answers to these dilemmas. But with increasing awareness of the loss of indigenous languages the support of outsiders becomes more important, even symbolically by trying to speak a few words in local languages. Our experience in Aotearoa New Zealand with the declining number of te reo Maori speakers provides awareness of the social, spiritual and personal cost of language loss for a community. Even an official language with a lot of institutional support struggles against the overwhelming power of English.

The young Hugh Wilson volunteered in a country newly transitioning to post-colonialism, and English-medium seemed the best option for a country-wide education system. It was assumed other languages would survive in homes. This approach is still followed in many countries, with English or another language such as French or Portuguese. Unfortunately, a consequence is that many local languages are now under threat.

UNESCO strongly advocates mother tongue-based multilingual education (MTB-MLE). Another former VSA volunteer, Robert Early, has been instrumental in the re-development of Vanuatu’s education language policy based on the MTB-MLE policy - a shining light of hope in the Pacific. And in Auckland, former VSA volunteer John McCaffery has been a prominent activist resulting in more official support for bilingual and multilingual education, especially in te reo Maori and Pasifika languages.

Alphabet at Tekatia Primary School in Kiribati, 2012. Early literacy materials in children’s mother tongues can readily be made relevant to their lives. (Photo: Hilary Smith)

As with many decisions in VSA volunteering, often there are no easy answers to the language questions Hugh Wilson faced in his assignment. We can safely say that ‘one size does not fit all’. Ironically, those of us working in language education have often been the last to learn local languages, due to the pressures on us to speak English. There is plenty of research available for those interested in the evidence relating to the language ecology of their place of assignment, and then decisions about how much language to learn will come down to juggling priorities. But no matter how small, any effort can have huge benefits, and with modern communication technologies these can continue long after the assignment ends.

Hilary Smith was a VSA volunteer in Tonga (where she learnt a little Tongan), Papua New Guinea (where she learnt a few words of Imbogu and could get by in Tok Pisin), and Laos (where she gained ‘market level competence’ in Lao and became fluent in spoken French). She chaired the VSA Council from 1998-2007, and is now an honorary life member of VSA and keen member of the Manawatu Branch. Her work in language education and research can be seen at www.systemetrics.co.nz, and her language-related blog is at Language Alive. Other language-in-development writing is at the Australian National University’s DevPolicy Blog.