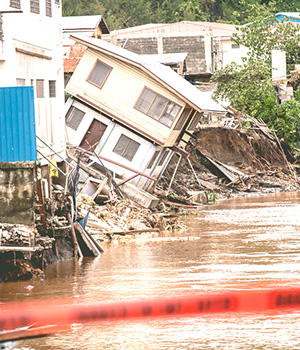 Houses along the edge of the Mataniko River, Honiara, partially washed away by the 2014 floods. (Photo by Simon Trotter.)

“Globally, climate change is sold as this doomsday, the ‘one day it is all going to come crashing down’, kind of thing. Here, we are already seeing the negative effects of climate change.” Luana Scowcroft understands the severity and urgency of the impacts of climate change for the Pacific region. A residing Cook Islander, Luana holds a deep connection with the environment. She has a keen interest in Pacific environmental issues, attending the United Nations Framework Convention on Climate Change negotiations in Copenhagen (COP 15) and Cancun (COP 16).

But Luana has concerns that climate change science and its implications are not being communicated in a way that engages local people. “Pacific communities definitely have an awareness of the term climate change, but not necessarily what it means”.

But if scientific research is one part of the solution then logically, communicating it in a way that generates understanding must be the other.

A recent study led by Rebecca McNaught of the Red Cross Red Crescent Centre in Vanuatu highlights the need for communications that are shaped by local needs, with one of the key challenges caused by the difference between Western scientific and indigenous understandings of the environment and change.

Luana agrees. She explains that Western perceptions of the environment often differ fundamentally from those of Pacific communities. While Western interpretations separate humans from the environment, Pacific understandings often consider them as one.

She explains that indigenous ways of protecting the environment have been practised for generations.

“Traditionally in the Pacific we have got methods to encourage conservation and sustainability – the likes of Ra’ui to close off parts of the lagoon for ‘X’ amount of months so it can regenerate. These are traditional concepts that aren’t new here and everyone respects them and that’s cool.

McNaught’s study confirms this: “Scientifically derived climate change information must be communicated in a way that resonates with local ways of perceiving the world, and must be delivered in a way that empowers local groups to apply their abilities”.

Luana suggests that Pacific communities should be encouraged with practical examples of how they can contribute positively to adapting and building resilience to the impacts of climate change, such as the increased numbers of powerful cyclones and other extreme weather events. She recommends getting young people enthused and choosing climate change as a career path.

“Internships or work experience could go a long way, whether it be through communications, through science, academia or policy.”

Science communication should play a prominent role in implementing approaches for addressing climate change. This may mean promoting useful local interpretations of environmental change in the Pacific and ditching Western-coined phrases like ‘climate change’.

2014 was the International Year of Small Island Developing States. In the words of UN Secretary General Ban Ki-moon, “We must leave no one behind”. 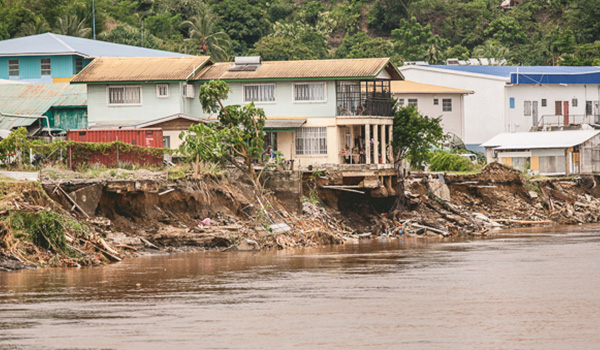