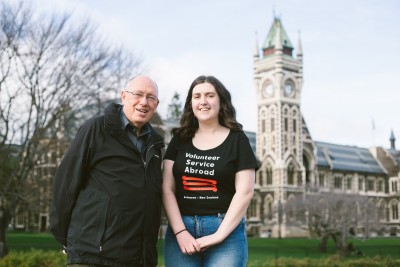 Tony Binns with UNIVOL Olivia Eyles who is working as a Student Learning Support Assistant in the Cook Islands. Photo credit: Chris Garden

More than a decade and a half from when he first floated the concept with VSA staff and on the eve of his retirement, Otago University Professor, Tony Binns, looks back on the UniVol programme and the hundreds of students it has placed on development assignments abroad.

“I came over from the UK in October 2004. I’d worked at the University of Sussex for 30 years and then got the opportunity to have a fresh challenge in a new country.” says Tony.

“That December I met VSA staff and talking to them informally about a project that involved university students going overseas on projects to countries which a UK based volunteer organisation (Voluntary Service Overseas- VSO) had links with and it worked very well.”

Over the following year VSA and Otago University worked together and launched the UniVol programme in 2006. As Tony recalls, “Initially it was a partnership between VSA and the Geography Department at Otago University. We sent 12 students overseas to all sorts of places including Vanuatu and Papua New Guinea. One male went to Tanzania, a couple went to South Africa, and we had a woman who went to Cambodia.

Six years and dozens of successful assignments with Otago students later, the decision was made to broaden and grow the UniVol programme, giving many other New Zealand tertiary students the opportunity for life changing experiences through development work.

“I think if I were to look back, I’ve been here for 17 years and I’m retiring at the end of the year, and if I look back on what I’ve achieved, right at the top of my list would be the UniVol program. I’m very proud of it indeed.”

VSA partners with a number of universities in Aotearoa to give young people the opportunity to volunteer across the Pacific region. UniVols are trained and financially supported to travel to and live in the countries they volunteer in.