14.04.2020 - Many VSA volunteers transform their lives and the lives of others not only during their assignments, but also in the work they continue to do well after their assignments have finished.

In 2018 we featured a story about former volunteer Bill Shields and the SRU Scholarship Scheme he set up in 2014 to enable young women from poor families in Cambodia to attend university.

When we published the story, 15 women had begun university study with the support of the scholarship, which pays the students’ university fees for their four-year undergraduate courses.

Bill contacted us recently with an update. “Seven of the students have now completed their studies and are waiting to graduate, and 27 are presently studying. The majority of our sponsors are from New Zealand, but we now have six from Finland.”

After Bill completed his second of two VSA assignments (in Cambodia and Bougainville), he returned to Cambodia to teach at Svay Rieng University in a remote rural part of Cambodia near the Vietnam border. It was then that he set up the scholarship scheme and began looking for sponsors.

“The scheme works as a sponsorship which makes it much more personal - each sponsor is paired with one or more students. The sponsor gets three letters a year from their students and also their academic results, photo and details. Some students and sponsors have even become Facebook friends.”

Former students, including a Buddhist monk, have helped him run the scheme and the New Zealand sponsors come from a variety of backgrounds including Bill’s friends, friends of friends, ex colleagues, a Rotary club and people who have a connection with Cambodia.

One example of how the scheme has changed lives was a young woman who was one of Bill’s students.

“Sovandy  was very clever and had a really good attitude, but then I noticed her performance drop dramatically.  One of her classmates told me she had to give up her study as her parents had run out of funds and were in trouble with a money lender. I met with her and told her I had someone who would pay her fees and would arrange to get back what her family had already paid to sort out the money lender. She didn’t speak but the tears just started to roll down her cheeks. She then studied even harder and has now finished, is waiting to graduate and is working as a teacher with an NGO, teaching children in a very poor village.”

Being a VSA volunteer helped Bill make all this possible. “Through my assignment with VSA I came to Cambodia and fell in love with the people. I made a lot of friends at the University which made it possible to come back. As an older volunteer it also gave me a new lease on life and made me see I still had something to contribute.

You can find out more about the scholarship scheme here. 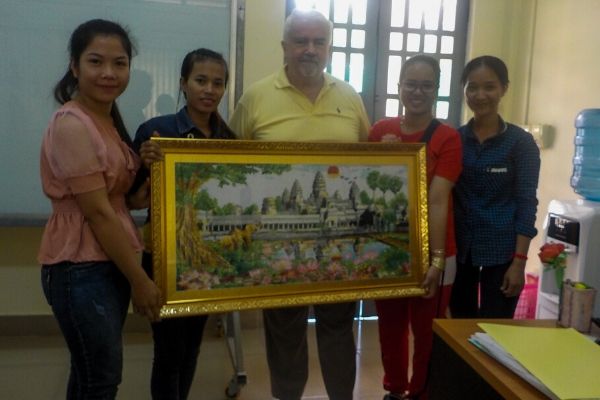 Bill with four of the scholarship students who have completed their study and are waiting to graduate. The framed embroidery work of Angkor Watt Temple is a thank you gift from the students to Bill. First year scholarship students writing letters to their sponsors to thank them for their support.