13.02.2018 - Reflections on a year with the UNDP Pacific Office in Fiji’s women in politics programme.

At a recent staff retreat, one of the icebreaker questions was to write down your response to "What’s the craziest thing you’ve ever done?" and then to guess who wrote what.  At our table, someone wrote: "Started working for UNDP!". It wasn’t me, but there have been times this year when it’s felt like one of the crazier things I’ve done.

I came to Fiji at the end of 2017 on a 12-month assignment through VSA, to work with the UNDP Pacific Office in Fiji's Effective Governance Team on the Women in Politics programme, which has the objective of increasing women’s political participation in the region. And the learning curve was one of the steepest I’ve encountered in a long time – getting to know the region and living in Fiji, the issues for women in politics in the Pacific and navigating the mysteries of the UN way of working. 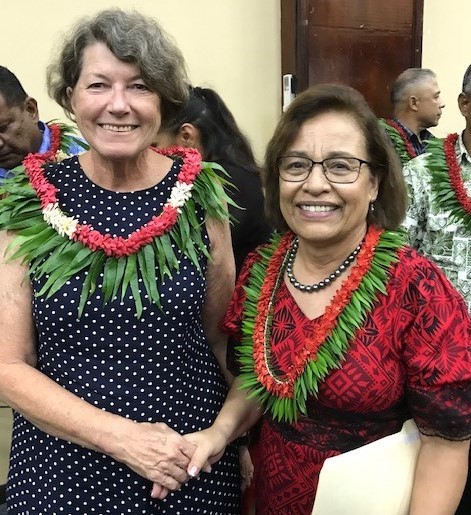 It’s been a great adventure: working in eight countries to deliver the regional programme; at least 38 flights for the job and more for personal travel; countless hours in airports big and small.  My UNDP colleagues have been infinitely patient and helpful.  I still don’t know how the finance system works – but they do! And it has been a privilege to work with such a wide range of wonderful Pacific people, both in UNDP and in the countries of the region.

But what did I do? I worked with women MPs in both Cook Islands and Niue to help them form women’s parliamentary caucuses; with aspiring women candidates in Tuvalu on building their capacity to stand for political office, both at island and national level; supported the women in leadership work at the national women’s conferences in Federated States of Micronesia and Republic of Marshall Islands; assisted a Practice Parliament for Women in RMI; presented on special measures to the FSM Congress; spent time in with the UNDP Samoa office to talk about their women in politics programme; in Tonga to develop a strategy for special measures to increase women’s representation; and presented to Fiji Parliament on gender mainstreaming. As part of the Gender Focal Team, I gained an understanding and appreciation of the depth and breadth of UNDP work across the region to support better gender equality outcomes in SDG 5 and the other goals.

That’s what I delivered – what did I learn? I learned that, while I know it’s tough for women in politics, it’s even harder for Pacific women.  For a start, there’s very few of them elected (at 7.3% in the region it’s the lowest average of female representation in the world, by a long way).  So, they need extraordinary courage and resilience to succeed and many of them will say that money, politics and lack of access to resources; lack of community support; deeply embedded cultural norms that reject women’s political leadership; and the difficulty of reconciling family responsibilities with elected office are all significant barriers. But there are outstanding women leaders in the Pacific, such as President Hilda Heine of RMI and Speaker Niki Rattle of Cook Islands, who are champions and role models for gender equality and for women in politics.  I learned that it’s hard for women MPs, once elected, to do all they want to do and for their voice to be heard because there are so few of them. I learned that the geography of the region brings its own challenges; for our Tuvalu workshop, the dates were determined once the monthly shipping schedule from the outer islands was known – some participants had to spend two days each way on the boat and two weeks in Funafuti for a five-day workshop. And from the Tuvaluan women, I learned that the gift of a fragrant garland of flowers each morning makes it a very special day (and there were many other garlands and shell necklaces from other women in other places too).

But I leave full of optimism; we can see that more women are contesting elections in Cook Islands and Fiji in 2018 (and Fiji now has just under 20% female representation); more men are speaking out to support women’s representation; more young women are thinking "I could do this", and several countries are looking at how they might bring in special measures to fast-track women’s representation.  Pacific people have always navigated the ocean by the stars; I hope the stars are aligning for Pacific women in politics.