27.08.2018 - Three years since it was launched, Papua New Guinea’s free phone service for victims of domestic violence is still serving thousands of people around the country.

The 1-TOK Kaunselin Helpim Lain was set up by ChildFund PNG, through the New Zealand Ministry of Foreign Affairs and Trade’s Partnerships Fund. In 2015, VSA volunteer Lauren Hart spent nine months in Port Moresby advising on the project and training the telephone counsellors. Since then, she’s visited annually to train new counsellors as the service has grown.

Recently, Kinime, a social worker at the service, visited New Zealand and told Radio NZ the call centre runs for 12 hours a day, seven days a week. She said it helps women, who can feel trapped by violence, to take action, and sometimes children and witnesses to rape or assault also call.

"They can call in from where ever they are, in the secret behind doors, out of reach of anyone. And also knowing the service is available, it empowers them. It also helps them to think that they can do something."

Since its launch, the centre has received 13,000 calls, with an even split between men and women.

The top issues that callers phone about are intimate partner violence, relationship issues, child welfare/child abuse, and legal issues. The centre experienced a surge after the deadly 7.5-magnitude earthquake that struck Papua New Guinea’s remote highlands region on 26 February, as one of the few ways in which people cut off by damaged travel routes, could access outside help.

Our original story from 2015 is below: 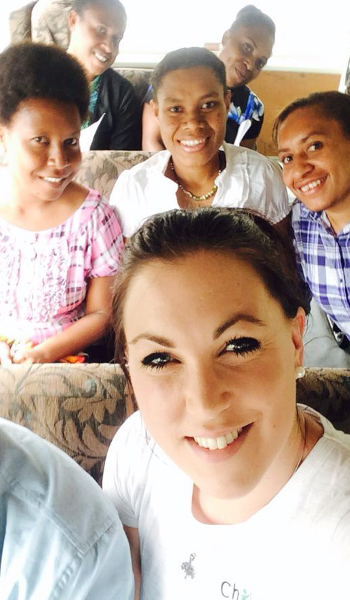 Lauren Hart, with some of her phone hotline team in PNG

Papua New Guinea has some of the worst rates of sexual and domestic violence in the world, with around two-thirds of all women experiencing violence at some point in their lives.

Now, for the first time, there’s a nationwide free phone line to help, based in Port Moresby. And if there was any doubt about the need, VSA volunteer Lauren Hart says they received nearly 100 calls in the first week alone when the line was launched in August and 250 calls in the first month of operation.

Lauren shared her thoughts on the program during an interview with the VSA Communications team:

“There have been so many different calls relating to a huge range of issues, although the main issues have been recent family violence incidents, sexual abuse, child welfare issues and child sexual abuse."

In a later interview with The Guardian newspaper, Lauren described as completely unexpected the number of men using the hotline. Some men rang to express anger and frustration at their partners for failing to behave in a way that was acceptable to them. Some rang because of sexual and violence-related trauma in their pasts, identifying themselves as survivors of abuse. Many had never spoken to anyone of their childhood abuse before contacting the hotline.

"That was definitely surprising,” she said. “We expected women to call, but it’s not something that men openly discuss here, violence perpetrated against them. The callers felt safe knowing that the service was free and confidential"

The 1-Tok Kaunselin Helpim Lain employs five telephone counsellors, two counsellors and two
senior counsellors, with an operation coordinator. All of the counsellors are Papua New Guinean and fluent in PNG’s three official languages of Pidgin, English and Motu.

Lauren says “The programme is based around both Western and Melanesian counselling styles, as a purely Western model would not necessarily fit the context of Papua New Guinea.”

Callers to the service are given conflict resolution strategies by Lauren and her team and discouraged from using violence as a way to resolve arguments.

Despite Papua New Guinea’s huge size and the remoteness of so many of its communities, 75% of the country so far has cellphone coverage, which makes a phone-in service ideal. The counsellors are able to work with callers to make plans to keep them safe in the moment, as well as referring them to ongoing support.

While the need for the service is great, Lauren says the helpline also represents, in the form of its young women counsellors, the opportunity for young people in the Pacific, when they have the privilege of good health and education, to be able to contribute to the wellbeing of the community. “It is a huge achievement for the service users and providers.”