Mary Hammonds, of New Plymouth, worked as a nurse/midwife in West Sepic Province, based at a Catholic mission hospital at the coastal town of Aitape, for two years, 1978-1979.

Most of the villages are reached by road and I drive myself to them in a Jeep, accompanied by a student nurse aide from the mission hospital.

Four-wheel drive is essential since the roads are bad and there are un­bridged rivers to be crossed. Heavy tropical rain floods them quickly and turns the dirt roads into impassable stretches of mud.

Two off-shore islands are reached by boat - beautiful islands surrounded by coral reefs and crystal-clear water, where the children run naked and play and swim all day. It would be an idyllic existence were it not for diseases like malaria and tuberculosis. Visits to the remaining villages entail being flown to a tiny inland airstrip in one of the mission's two small Cessna 206 planes. Then the plane leaves us and for five days we walk from village to village, hiring carriers at each to transport the clinic supplies and equipment to the next.

Weather and transport permitting, we visit each village once a month.

Every patient who requires attention receives it or, if necessary, is referred to hospital. But my fundamental responsibility, as defined by the PNG Health Department, is to children from birth to five years and to pregnant women.

The infant mortality rate is high and it is common for two or more children from a family to have died in infancy, sometimes from neonatal tetanus. A few women come to hospital to deliver, but the majority prefer their children to be born at home in the village. Occasionally, on patrol, I may be asked to help during labour or delivery if there are difficulties but more usually the delivering woman's mother or mother-in-law is called upon to act as midwife. Her role is to cut the cord with a razor blade or piece of bamboo, after the placenta is delivered. In seaside villages delivery takes place in a special house built on the beach from which the 'midwife' must take the baby, before the mother has touched it, to be washed in the sea. According to custom, the mother must remain in the house for at least a week, often longer. Food is brought to her there and she may leave only to wash. The custom is the same for women who have had stillbirths or miscarriages. Like many traditional practices this one probably has a well­founded root in history.

When a child cannot be breast-fed by its mother, usually because of maternal death, other women will always fulfill this need. Recently, a grandmother brought to clinic a child whose mother had died. At first, several lactating young women had shared the child's feeding, and the infant was also suckled at the milkless breasts of the old lady. Within a month the grandmother was fully lactating and now is caring for the child completely.

There is a law in PNG which prohibits the use of baby feeding bottles unless supplied on prescription. Thus, overseas baby-milk manufacturers are prevented from sordidly exploiting these developing people through the unnecessary promotion of artificial feeding – as happened in Africa at the cost of countless infants who died from gastro-intestinal infection.

To some extent the villagers themselves promote the welfare of their offspring through strict adherence to their own sexual taboos which usually ensure that pregnancies are spaced at least two years' apart. In some areas, for example, it is forbidden for a man to sleep with his wife while she is breastfeeding because it is believed that the breast milk will become contaminated by semen.

Familiarity with such beliefs and with local lifestyles are important to the appropriate planning of nursing care and health education, and my regular walking patrol provides me with particularly excellent oppor­tunities for getting to know the people well. We sleep in standard village houses, built from the raw materials of the bush and there are always plenty of eager young helpers to blow up my airbed -a singular touch of luxury -and to assist with cooking meals.

In the evenings the villagers love to sit around talking and telling stories and with much hilarity they try to teach me their local language. These people live such basic, unsophisticated lives, with so few possessions, that I always feel very materialistic when I am with them. They are simple and uncalculating and most have a delightful sense of humour.

The rivers provide our bathrooms and the children love to wash with us delightedly lathering themselves with my soap. They shyly touch my skin and hair, fair and strangely contrasting with their own dark skins and crinkly black hair. I have even had a child go through my hair indulging in the popular local pastime of searching for lice -without success!

In one village some of the children and adults have the little finger missing from one hand. I asked why and was told that when two children from a family have died, the next-born has its little finger removed with a razor blade thus ensuring its survival.

The last village on the patrol is called Mihet and sits on a mountain-top overlooking superb views of the surrounding countryside. It is a small place and the people are extremely kind and friendly. There is a spirit house, ‘haus tambaran’ here which only the men are ever permitted to enter.

At Mihet l sleep in a house with all the women and children. The beds are wooden platforms raised a few inches from the ground. Fires burn on the earthen floor and one fireplace has the treadle of a Singer sewing machine as a grate on which to rest pots. I'm sure Mr Singer never visualised his invention, or parts thereof, reaching such remote places or being put to such diverse uses! Dogs, cats, chickens and piglets run in and out of the house and at meal times receive their share along with everyone else. At nights the chickens and piglets are shut out but the cats and dogs remain inside to sleep beside the fires. Occasionally in the night l hear a dog bark or a child cry but usually sleep remarkably well in spite of my expectations that  all sorts of insects and spiders will drop upon me from the cobwebby, smoke-blackened roof with its rows of tobacco hanging up to dry.

The people of Mihet, like those of the other villages, spend most of their time growing, catching and preparing their food. However, some coffee, a good cash crop, is now grown in the area though it must be carried on the backs of the people over many miles to be sold. The men usually attend to this but women are responsible for most domestic carrying, transporting enormous loads of firewood and vegetables on their backs, and often a baby in a sling, up the hills to the villages.

They accept this without question or thought, just as it is unquestionably accepted by everyone that there is a spiritual explanation for all natural phenomena. Floods, earthquakes, landslides ... all are brought about by the wrathful spirits, aroused perhaps by a man planting a particular crop while his wife was pregnant or any one of a host of other, similar reasons.

The Iong walks between villages can be exhausting, and there are leeches. The bush is really beautiful with its vines and creepers and magnificent trees, some stretching hundreds of feet into the sky and others draped with a vine on which masses of bright orange flowers are clustered. The carriers are alert, their eyesight and awareness in the bush amazing. They draw my attention to the footprints of animals and birds, including the mighty cassowary, to which I would otherwise have added mine without noticing. They kill a snake on the path before I am aware that it is there. As we wade through rivers, they emerge with fish, decapitated with one stroke of a bush knife, and ready for eating at the end of the day.

Such activities are typical of the villagers, who live close to nature. Indeed, they see themselves as an integral part of it and survival of the fittest is taken for granted. When death comes, as it often does, it is not intercepted by modern technology but accepted as a matter of fact. After an initial period of grief, expressed by wailing and other rituals, life goes on as normal. 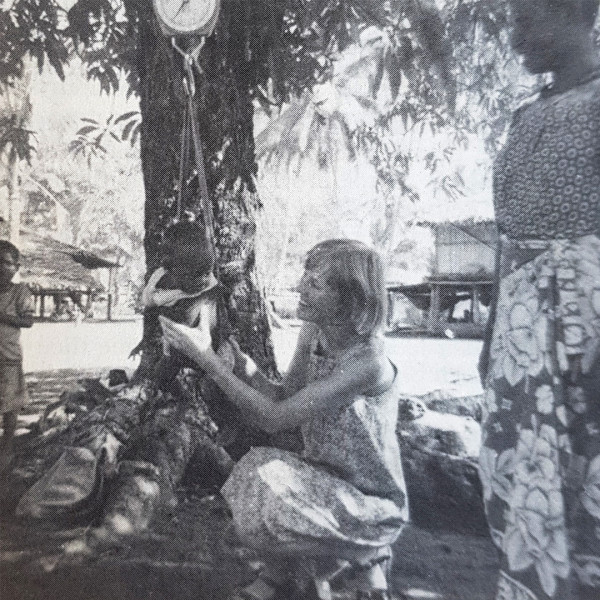