25.02.2020 - For women and children escaping violent domestic situations a safe house is a much needed haven where they can live in a peaceful and safe environment. However, this is only the start of their journey and women need ongoing support to continue to live violence free.

The Filiae Maria Imakulata (FMI) Sisters in East New Britain, with the support of the Archbishop of Rabaul, opened the first purpose built safe house (Meri Seif Haus) for victims of family and sexual violence in the Papua New Guinea province in 2019. They wanted to offer not only a sanctuary, but also a place where women could access services such as healthcare and legal aid, learn important life skills, and, importantly, they wanted to help women to move on to the next stage of their lives.

FMI was established in 1912 with the focus on working with women so the Meri Seif Haus is a natural extension of their work to prevent violence against women and children. The FMI sisters see the safe house as a practical way of carrying out their mission of helping people in trouble. The Head of FMI, Sister Wilhelmina, has shown unwavering commitment and support to the establishment and operation of the Meri Seif Haus.

Sister Serah coordinates the house and is the case manager. As well as casework, she teaches life skills, including how to interact with and treat children without violence. Sister Lucy is a new nun and is being mentored by Sister Serah.

VSA volunteer Fiona Richards has been working with the Sisters at the Meri Seif Haus since her assignment began in May 2019 and hugely admires the work the Sisters do.

“Sister Serah teaches people so many skills including how to defuse situations without violence,” says Fiona. “She has been a nun for 23 years and has worked right across PNG. She is also a seamstress and teaches women to sew so that they can have an independent income.”

“It’s critical to have pathways out of the safe house programme, so that women and children have a safe place to go to,” says Fiona.

“Once I had completed the work on the processes and policies, my priority shifted to supporting community education and stakeholder engagement. There is huge amount of community outreach. The Sisters work with the local district government people (who can issue protection orders) to educate them about the issues women face.”

The Sisters deliver awareness and education programmes to the community and professionals working in the field. The programmes cover relationships, emotional regulation (for boys), self-esteem (for girls), and communication (for women). These programmes were initially trialled in high schools and the teachers’ training college and received great feedback.

“The programme consists of two sessions over a couple of hours. It’s interactive, in the local language and includes small group exercises. Twelve sisters have been trained to deliver these programmes in the community.”

It’s critical for the success of the Meri Seif Haus programme to create support networks at grass roots level in villages and collaborate with other community organisations such as the Family and Sexual Violence Action Committee, child welfare groups, the police, the courts and hospitals.

“We emphasise that the goal is not end relationships or break up marriages, it’s to stop the violence,” says Fiona.

“This means we encourage an open dialogue, and even though counselling is a relatively new concept in PNG we encourage males to see counsellors. We also support women who don’t want to come into the safe house for whatever reason.”

FMI is a part of the Catholic Archdiocese of Rabaul, one of the oldest Catholic Missions in PNG and one of VSA's longest partners in East New Britain.

The Archbishop has been a strong supporter of the Meri Seif Haus and the Archdiocese provided the land.

The safe house was built with fundraising and support from various organisations including the New Zealand High Commission, VSA and local businesses. This would also not have been possible without the mahi from VSA volunteers Laura Barnett, Finn Egan and Gordon Botha. 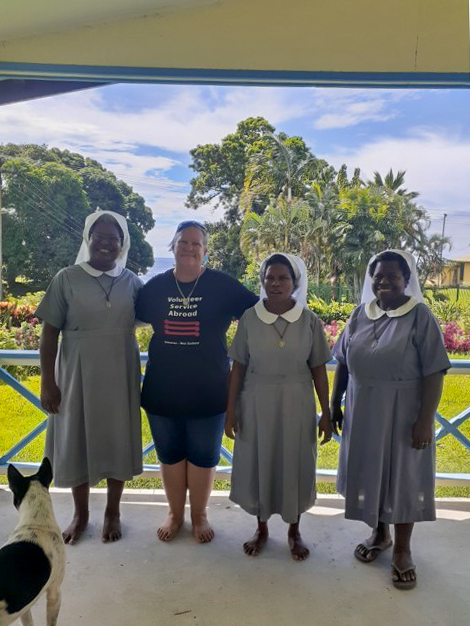