08.05.2020 - Having to return to New Zealand earlier than planned due to the pandemic hasn’t stopped Dr Ngaire Tihema carrying out her VSA assignment. Ngaire has continued in her role as Literacy and Language Education Adviser for the Centre for Learning and Teaching at Divine Word University (DWU) in Papua New Guinea (PNG) by e-volunteering from New Zealand.

The University’s main campus, located in Madang province, expressed its interest in the type of support VSA offers in 2019, so requested the assistance of a volunteer to support the capability-building, professional development and English language skills of staff in the recently established Centre for Learning and Teaching. So Ngaire, who was already a volunteer at Gaulim Teachers’ College in PNG, raised her hand to support the work the Centre is doing. 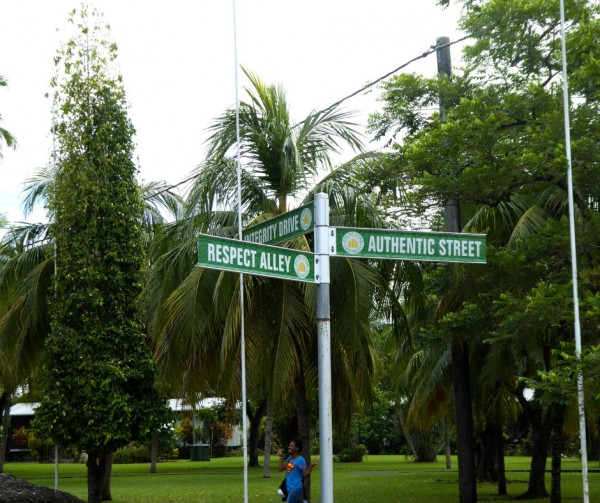 “My work involves creating PowerPoint slides, video lessons, tasks/activities and writing guides around English for academic purposes, then uploading them to Moodle (a course management system) for the University’s staff and students,” explains Ngaire.

The work Ngaire is doing aligns almost exactly with what she was doing when she was based in PNG. “While PNG was in a state of emergency, educational institutes were closed. Luckily DWU already had the infrastructure and had been preparing to go paper-less for some time. The pandemic was the catalyst to do this, so staff and students were able to continue participating in my Moodle courses.”

DWU has several campuses throughout Papua New Guinea, one of which has been partnered with VSA since 2016. “The campus in East New Britain province, previously known as Kabaleo Teachers’ College, has benefitted from several VSA UniVols who have been great assets to the university by providing academic support to students as well as staff,” says Ngaire.

While the DWU in Madang is well-equipped with facilities to cater to eLearning, three of VSA’s partner organisations in East New Britain – all teacher training colleges – are still in the process of strengthening their digital learning platforms, capacities, and capabilities.

“There is now a sense of urgency to expedite the eLearning capacity of educational institutions,” says Ngaire. “I believe that these institutions will greatly benefit from the support of VSA volunteers in the future to assist with capability and capacity-building.”

Would Ngaire recommend e-volunteering? “As a volunteer who has extended her initial assignment and taken on a new one, my opinion is undoubtedly biased. But I am a believer of the following whakataukī: ko tāu rou, ko tāku rou, ka ora te iwi.”