16.02.2018 - Leesa Roy is accompanying her partner, Kevin McCarthy, who's on assignment as a Marketing, Communications and Fundraising Adviser with the Elwood J Euart Association in Vanuatu. They return home in January 2020.

We're counting down the days until we leave. Currently we're at six: acclimatising in the heatwave across New Zealand. Today it's 33 degrees outside. We've discovered aircon takes on a whole new meaning when it's this hot. We've also realised that to truly acclimatise to Vanuatu's weather, we'd need to increase the humidity by an extra 15-25% and skip the aircon. 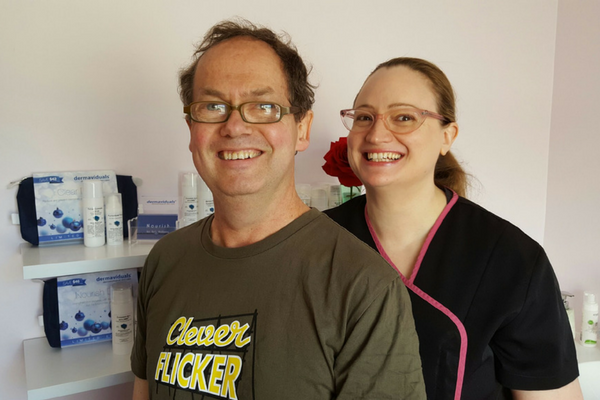 Kevin and Leesa, counting down.

For the last six weeks we've been housesitting and couchsurfing at friends' homes. We start to notice each other's quirks more. Kevin's obsessed by other people's toasters. In each new place we stay he has a rant about designer toasters, which always ends with something like, "I mean it's a toaster for goodness sake, you don't need it to do your emails do you?!"

It turns out I have an innate ability to work a toaster, unlike my luddite partner. I also realise it's most likely we'll never own a Smeg toaster with illuminated controls, extra-wide bread slots, reheat, defrost, and bagel/crumpet modes.

It's hard to believe that it was in June, seven months ago, that we applied for the role with VSA.

Like many other government departments, Kevin's work was going through yet another round of restructuring. He liked his job, he liked the team he worked with, but the continuous disruption and hit to staff morale had really started to take it's toll.

I'd seen the effects of restructuring on my clients, their families and my business. From stressed out clients, to those in tears about how they were going to pay the mortgage, and eventually the much-regretted cancelled appointments. Restructuring creates a cascade of fear that spreads far and wide. I didn't want that happening to us.

Late one night I was checking out the VSA website and discovered a role that I knew would be Kevin's dream job. He asked me to send him the link, and headed to bed.

Over the next few days, he asked what I knew about Vanuatu. "I wrote an essay about it at uni," I replied nonchalantly. Of course what I really wanted to say was "OMG you have to apply!" But I kept quiet, as it really had to be his decision.

I noticed a few books about the New Hebrides' involvement in the Pacific War appearing as bedtime reading. From the sinking of the SS Coolidge, to the dumping of millions of dollars worth of US military equipment into the sea at the end of the war, Kevin's passion as an avid war historian was piqued with the enormity of WWII history to be explored in Vanuatu.

Needless to say, it wasn't long before we were applying for VSA. CVs had to be updated, referees contacted, and applications completed. It was the perfect distraction from the rounds of "consultation" being conducted at Kevin's work.

And then we waited. "Do you think you should call them?" I asked. "No give it a few more days," Kevin replied. His patience was admirable, if somewhat cloying.

At last he called. There had been delays. Don't worry, they'll be in touch.

In the meantime we listened to podcasts, followed the local news online, learned some Bislama words and phrases, and spoke to others who had been there. It really started to feel like this was something we could to do.

Three months later we were accepted for an interview.

On the day we met the two other applicants applying for the role, and had two interviews together as a couple. I'm pretty sure that if an applicant wasn't sure about whether two years abroad was right for them, they'd know by the end of the interview process.

A few weeks later, we found out we were successful in the interview and the next stage would be the Volunteer Briefing at VSA in October. If an applicant was still not sure whether two years abroad was right for them, they'd definitely know by the end of the four-day briefing. 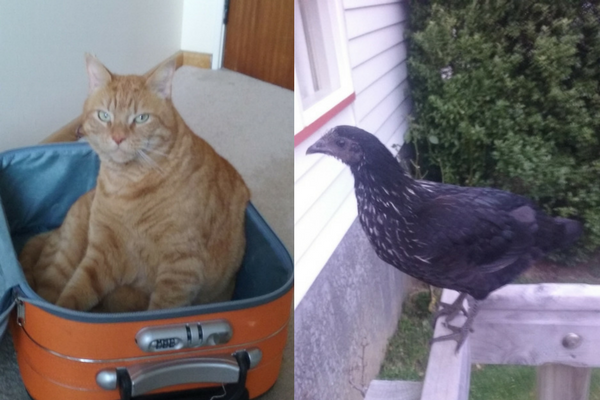 Thomas, AKA Sir Evil, helps with packing. Right: a beloved chook, off to a new home.

By this stage, things were starting to 'get real'. When we had our interview, potentially we could have been leaving 8 November. This had now moved to 22 November, giving us five weeks to rehome Thomas, our socially-challenged giant ginger cat, find new homes for our five chooks, pack up the house, move everything into storage, find tenants for the house, fundraise for VSA, get our vaccinations, obtain medical clearance, close my business and refer my clients.

Friends asked whether we'd be getting married in Vanuatu. To be honest, by this stage I don't think either of us wanted to marry each other!

A week out from our proposed leaving date, VSA advised us we'd now be leaving the end of January. While this reduced some of the pressure of trying to get our medical clearance through in time, it also created a few more challenges.

We'd already rehomed Thomas (aka Sir Evil) and my beloved chickens, arranged for tenants to move in, moved most of our stuff into storage, closed my business and referred my clients.

And here began the housesitting, couch-surfing, and toaster tangles...

As for the restructuring, after close to a year of consultations, discussion documents, consultants, and endless walls of coloured Post-It notes filling the office, very little had changed.

Instead, what had been transformed was us.