30.12.2016 - Fifteen years after Bougainville's brutal conflict ended, the country is ready for a new chapter. In conjunction with the government of Papua New Guinea, a referendum on its future political status is planned for 2019.

With the new beginning comes hope, and that hope is tangible when VSA UniVol volunteer Neelum Patel talks about her work at the Nazareth Centre teaching young Bougainvillean women English, maths and sport.

“I’d love to come back in a few years to see the girls that I’m teaching, their confidence going up, and to see them succeeding in their business,” she says, “just to know they have the confidence to know they can do anything. They’ll have their personal independence.” 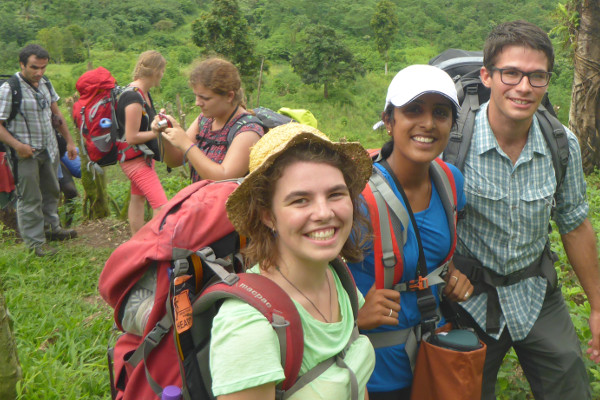 Fellow UniVol volunteer Rebecca Vella-King speaks with the same feeling. “Bougainville was my first choice for an assignment,” she says. “WhenI was quite young we had a Bougainvillean woman, Josephine, stay with us for a few days while she was promoting her book. I was six and didn’t really understand what an incredible person she was but when I was a bit older I read her book and was amazed by her experiences and her strength. One of the great things I’ve done here is manage to catch up with her a few times.”

Rebecca’s part of a small team establishing a new environment bureau. “It’s such an exciting place to be in terms of setting up the government and the referendum,” she says. “It can be frustrating but you really get to know people here and I feel a bit closer to people's real lives. It feels very safe and very friendly.”

Bougainville has a real sense of community and a collective will to build a new nation that has captured Neelum’s heart. “I’d never even heard of the place – I remember going to the [UniVol] briefing and I was like ‘where is that?’ It’s been amazing – I can’t imagine being anywhere else now.”

For both volunteers one of the most memorable experiences was visiting a remote village in Sisivi. As Neelum describes it, “Going up to the village – I can’t even explain it, it was incredible and so beautiful that I don’t even feel like it was real now. It was like a dream.”

“It was awesome,” says Rebecca, “because when you’re travelling as a women sometimes things can be a little restricted, but on that day a couple of village women took me under their wing and taught me how they cooked and lived and even let me record them singing. It left me feeling really privileged.”

Jared Linnell is another UniVol volunteer in Bougainville. He’s been project-managing a government website that has just recently gone live at www.abg.gov.pg

The day-to-day difficulties of putting together a complex IT project in adverse circumstances have been more than made up for by his experiences. “The community bonds within the VSA community here are really strong – and with the locals too.”

“There’s a lot of eagerness in the leadership, in the government, to bring Bougainville back into the world,” he says, “It’s part of a necessarily slow healing process since the crisis and I think there’s a lot of people really excited to present their country to the world.

“For me it’s been a really special experience to be able to contribute to that, through the website which will help connect Bougainville. I think it’s something very special to look back on.”