In September 2019, Lagi was appointed as the first local Programme Manager for VSA in Samoa, following 4 years in the role of principal for Loto Taumafai School (LTS) in Apia. Lagi’s fundamental belief in a purposeful life is reflected in her passion to connect and engage with people on her journey, and to see them flourish in their strengths and potential. The inspiring VSA mandate; “Connecting People ~ Transforming lives” reflects her heart for people and meaningful connections, both personally and professionally.

Lagi’s previous work experiences in the areas of social work, community engagement, administration and management as a principal, altogether contribute to the high level of logistical administrative and people management skills she brings to her current position at VSA. Her personal experience of working closely with amazing volunteers from VSA, during her time as a principal at LTS was a significant experience, that set the foundation of her desire to be a part of the VSA team. Almost 5 years later her dream was fulfilled.

Lagi embraces her role with passion and intent developing volunteer assignments that reflect genuine needs which are locally identified. Furthermore, the sharing of skills and experiences in this mutually beneficial exchange, serves to empower, upskill and strengthen the capacities of local organisations and communities. Lagi is committed to cultivating successful partnerships that have sustaining and long-lasting impacts for Samoa.

During a lengthy season of raising children and caring for parents in Australia, Lagi was an avid volunteer in her local church in various ministries, where she was grateful for the opportunity serve people from diverse backgrounds, as well as obtain a Diploma in Pastoral Counselling. Lagi also holds a Master of Arts in Education from Auckland University.

Samoa born and bred until 13 years old, Lagi had the blessings and privileges of education and living in Auckland NZ for 18 years. In the year 2000, she migrated to Sydney Australia with her husband and raised their 4 children there for fifteen years, whilst taking care of their parents. In January 2015, the Natanielu family returned home to Samoa with a heart and mission to serve their community, where Lagi believes her current position with VSA is a vehicle for her to contribute to the development space – in this season of her journey. 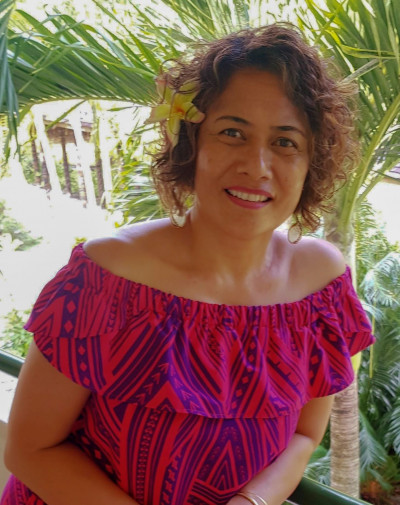