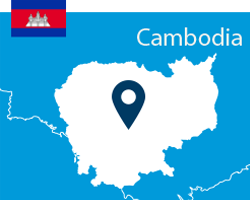 Cambodia sits at the heart of Indochina and is said to be one of the most heavily land-mined countries in the world, following decades of war and conflict. Approximately 90 per cent of its people are Khmer (ethnic Cambodians), but there are also a substantial number of Muslim Cham, ethnic Chinese, Vietnamese and animist ethnic minority Lao hill tribes. Cambodia’s official religion is Theravada Buddhism, also practiced in the Lao PDR, Thailand, Myanmar and Sri Lanka.

Cambodia is the second-poorest country in Southeast Asia with subsistence agriculture accounting for over 50 per cent of GDP. Tourism and the garment-making industry are the main contributors to its recent economic recovery.

Decades of isolation, war and conflict have resulted in the destruction of much of Cambodia’s physical, social and human capital and the long-term development of the economy remains one of its biggest challenges. A lack of basic infrastructure in rural areas continues to hinder economic development.  Economic growth, although averaging six per cent per year, has a narrow base, resulting in the poorest people (living mostly in rural areas), experiencing limited benefits. Of particular concern is the lack of investment in rural livelihoods, persistently high child mortality rates, low levels of education in girls, the high cost or unavailability of energy, and unsustainable exploitation of the country’s natural resources.

What we’re doing in Cambodia

VSA’s work in Cambodia is in line with our commitment to ten ASEAN assignments over the funding period and is principally in partnership with International Development Enterprises (IDE). IDE is a non-profit International NGO, based in the USA, with a market-based approach to poverty reduction. iDE builds profitable enterprises and value chains that deliver sustainable social and economic benefits to the rural poor, enabling them to increase income and improve their quality of life.

Cambodia’s agriculture sector is large and diverse, and it is extremely economically important. VSA volunteers have tended to take multiple consecutive assignments with the same partner, which has led to ongoing strong local relationships, and the honing of the development approach and skills used to implement it.

Clint Smythe is working with small farmers around Siem Reap